In this week’s Week in Review: Major brands pull ads from YouTube following the latest brand safety scandal, CTV continues to drive The Trade Desk growth, and Amazon is predicted to claim 10 percent of US digital ad market in 2020. To receive an update on the industry’s top stories every Friday, sign up to the weekly Video Round-Up.

While many brands which paused advertising on YouTube during previous brand safety crises have since returned, there are signs some are becoming frustrated with an apparent lack of progress in tackling these problems. German food giant Dr. Oetker reportedly asked YouTube “to explain how it could happen that advertising of our company was placed in an environment that we strictly reject and consider highly reprehensible ethically.” YouTube has said it’s disabled comments on tens of millions of videos and taken down over 400 channels in response.

CTV Acceleration Drives The Trade Desk to 55 Percent Growth
Revenues for demand-side platform The Trade Desk reached $477 million in 2018, marking growth of 55 percent, and the business forecasts revenue of at least $637 million this year. The company, one of ad tech’s big success stories in recent years, has invested heavily in connected TV, and CEO Jeff Green said CTV sales are “measurably helping the business.” Green said that CTV sales grew nine-fold between 2017-2018, and that a double-digit number of brands spent over $1 million on CTV in 2018.

Amazon Predicted to Take 10 Percent of US Digital Ad Sales by 2020
Research firm eMarketer this week revised is projections for Amazon’s ad business upwards, predicting that the company’s US ad revenue will reach $15 billion in 2020, just under ten percent of total US digital ad sales. This still leaves Amazon a fair distance behind Google and Facebook, which are predicted to make $88.25 billion combined in the US in 2020. But Amazon’s ad business is growing fastest of the three, with ad revenue in 2017 estimated to have been $3.3 billion. Amazon’s speedy growth could be seen as either a sign of hope for those looking for an alternative to the duopoly of Facebook and Google, or worrying for those who see fear an ad market increasingly dominated by a few huge players.

The Week in Tech

The IAB Privately Believed RTB Would Violate GDPR, Claim Privacy Campaigners
Privacy campaigners this week filed new evidence in a complaint with data protection regulators in the UK and Ireland, claiming that industry body the IAB believed real-time bidding (RTB) would be incompatible with consent under the EU’s General Data Protection Regulation (GDPR). The IAB created the ‘Transparency and Consent Framework’ to help digital publishers and ad tech companies comply with Europe’s new data laws, but the campaigners claim that the IAB itself feared that real-time bidding as a practice is fundamentally irreconcilable with GDPR. Read the full story on VAN.

UK Government Report Calls Facebook ‘Digital Gangsters’
Earlier this week, a report on fake news from the department of Digital, Culture, Media and Sport (DCMS) accused Facebook of acting like “digital gangsters” by not cooperating fully with investigations into how the platform was used by malicious actors to influence political votes. The report called for comprehensive new regulations, including a mandatory code of ethics for how social media companies operate, and for an independent regulator to have the power to bring legal cases against social media businesses and force them to hand over user data.

This followed hot on the heels from a separate DCMS investigation into the sustainability of journalism in the UK. The final report said that the UK’s competition and markets authority should investigate the digital ad industry, and for regulatory oversight of online platforms relationships with new publishers.

Nielsen says the initiative combines Sorenson with previous acquisitions Gracenote, which owns automatic content recognition (ACR) technology, and Qterics, a smart TV software and privacy management company. Nielsen says that by tying these elements together it will be able to deliver addressable TV ads on smart TVs while also handling campaign management and measurement. Read the full story on VAN.

Teads and Realeyes Find Success Factors for Six Second Ads
Research from Teads and Realeyes has demonstrated the importance of designing creative specifically for the six-second ad format with a strong narrative to create an emotional connection with the viewer. Key findings from the research were:

New SVOD Services Will Add 53 Million Subscribers in US says IHS Markit
Major new subscription video on-demand services from Disney, Apple, WarnerMedia and NBCUniversal have the potential to add 53 million paying subscriptions to the US market by 2023 according to IHS Markit, This would add up to $3.6 billion in incremental revenue for the direct-to-consumer channel business in the US. “Subscriber growth of this magnitude assumes an aggressive strategy from all the major services,” said Dan Cryan, executive director of research and analysis, IHS Markit. “This strategy could include making movies available earlier or bundling, either at no extra charge or as a low-cost add-on, with other products and services that already have large customer bases. Less aggressive policies would result in lower overall subscriber growth, but they would still expand the video subscription market.”

“Linear TV is Dying” says Moffett Nathanson
Proclamations of the death of linear TV are hardly new, but analyst Moffett Nathanson was the latest to engage in a round of doomsaying this week with its new report ‘US Media: Watching the Slow Death of Linear TV… Live’. The research, presented in the FT, finds that the monthly number of people using television in the US is declining for every age group, even over 55s who are often assumed to be relatively unaffected cord-cutting.

Charter Communications Launches New OTT Service
American telco Charter Communications has launched a new paid over-the-top streaming service under its Spectrum brand, called Spectrum TV Essentials. The service will be available to those subscribing to Spectrum broadband packages who aren’t already subscribed to Spectrum video services. The service will include content from programming partners including Viacom, Discovery, AMC and Hallmark. Subscriptions will cost $14.99 plus tax, and will be available on mobile and OTT devices including Apple TV, Roku, Xbox One, Amazon Kindle Fire and Samsung Smart TVs.

TF1 Revenues Grow 7.3 Percent After Aufemein Acquisition
French broadcaster TF1 Group reported that revenues in 2018 grew by €156 million, a jump of 7.3 percent, due in large part to its acquisition of digital publication Aufeminin and the strong performance of its other digital properties. The broadcaster has been investing heavily in digital, recently uniting its digital properties into one division called ‘Unify’, and says that this diversification of revenues streams is now paying off.

Verizon Media Group Adds New Ad Formats
Verizon Media Group, formerly known as Oath, has expanded its ‘Moment’s native ad format to include gaming, shopping, 360 degree and carousel capabilities. Verizon Media says that naive ads make up 60 percent of display ad spend, a number that is still growing, and its new capabilities are designed to capitalise on this and draw more advertisers onto Oath Ad Platforms.

Video to Make Up 79 Percent of Mobile Web Traffic in 2022 says Cisco
By 2022, 79 percent of all mobile data traffic will be video, compared to 59 percent in 2017, according to Cisco’s Visual Networking Index. “Because mobile video content has much higher bit rates than other mobile content types, mobile video will generate much of the mobile traffic growth through 2022,” said the report. “Mobile video will grow at a CAGR [compound annual growth rate] of 55 percent between 2017 and 2022, higher than the overall average mobile traffic CAGR of 46 percent.” 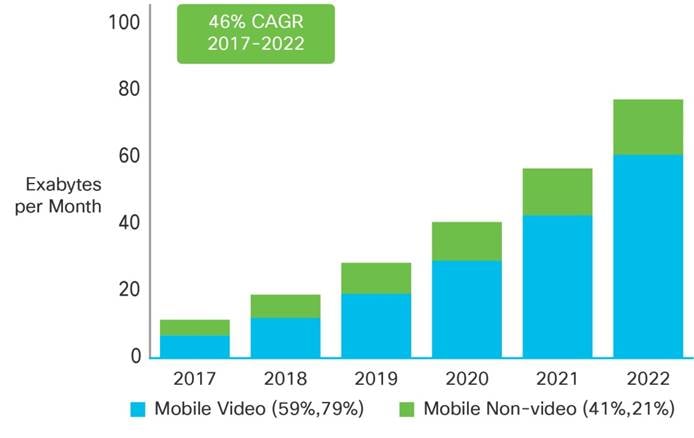 Viacom and Facebook Watch to Collaborate on Interactive Quiz Show
Viacom International Media Networks is set to launch a new interactive quiz game show, MTV Stax, on Facebook Watch in the UK. Following the popularity of quiz app HQ Trivia, Facebook Watch launched its own game show called Confetti last year, and Viacom will use the same tech for its own offering. The show will be free-to-play, and will be broadcast three times a week for ten weeks.

Walmart Takes Digital Ad Sales In House
US retail giant Walmart has confirmed plans to take its digital ad sales and analytics in-house, hiring hundreds of new employees to handle the work. The move will be a huge blow to WPP-owned Triad which previously handled the account – Walmart made up the bulk of Triad’s business, according to AdAge. Triad has reportedly invoked non-compete clauses in its employees contracts in order to prevent them from moving across to Walmart. The move follows a similar blow to Triad back in 2017 when eBay, its second largest client, took its ad sales in-house.

AA ad IPA Go On Pre-Brexit Marketing Drive for UK Ad Industry
Two UK ad industry bodies, the Advertising Association (AA) and the Institute of Practitioners in Advertising (IPA), are coordinating with the UK government on an effort to promote the UK ad industry to international clients. The initiative, ‘Export Month‘ will involved promotional efforts at events including Advertising Week Europe, South by Southwest and Shanghai International Advertising Festival, as well as the publication of the first annual ‘UK Ad Exports Report’ from the AA.

ProSiebenSat.1 Makes New Executive Appointments
ProSiebenSat.1 has made several new senior appointments following high profile departures from the company. Rainer Beaujean has been picked as CFO to replace the departing Dr Jan Kemper. Wolfgang Link, currently chief content and channel officer entertainment, will be appointed co-CEO of entertainment, alongside Michaela Tod who will join in April.

SpotX Hires Sophie Knight
SpotX has appointed Sophie Knight as director, platform services for the UK. Knight has worked most recently for LoopMe, and has also worked for GroupM, Xaxis, Specific Media and Adviva.

Ad of the Week