In this Week in Review: Vevo and AOL extend their programmatic agreement to Europe, YouTube pledge transparency and the only way is app for Apple TV. For your weekly summary of industry news and other VAN interviews and videos, sign up to the weekly Video Round-Up.

VEVO Extends Programmatic Video Advertising Agreement with AOL to Europe
VEVO has selected ONE by AOL to power its private video marketplace in Europe. The move extends the existing agreement that has been in place in the US since 2012, and will now be rolled out from VEVO’s offices in Berlin, Germany. The move comes shortly after AOL’s deals with Microsoft and Millennial Media.

YouTube to Reveal Ad View Data
In response to complaints by advertisers such as Unilever and Kellogg’s, YouTube is preparing to let companies see what proportion of the adverts on the video platform can be seen by viewers. This initiative is expected to start by the end of the year and is likely to attract interest from well-known verification companies according to the Financial Times.

Apple TV All About Apps and Games
Apple CEO Tim Cook has unveiled a new set top TV box with its own app store and new operating system. The device features a remote control with a touch-sensitive panel and a microphone that allows it to be voice-operated through Siri. Apple did not unveil any rumoured TV shows and movies subscription package of its own for the box.

Adblock Plus Targets iOS
Adblock Plus, the developer of popular desktop ad-blocking software is no longer only blocking ads on stationary PCs, but has moved into mobile. A new iOS ad-blocking app joins the Android version that was launched back in May 2015.

Consumers Value Free Editorial, Yet Still Install Ad Blockers
65 percent of consumers believe society would be worse off without high quality, low cost newspaper and magazine content, according to research from Teads. Despite this, 15 percent of consumers have already installed ad blockers and these people are, ironically, 12 percent more likely to value low cost or free editorial than the general population.

Video Buffering Wait Time Less Than 15 Seconds for iPhone Users
Poor mobile video streaming is considered an even bigger issue than a dropped call for US and UK iPhone users according to research commissioned by Openwave Mobility. Over half of subscribers in both countries will abandon streaming a mobile video if they have to wait longer than 15 seconds.

35 Percent of All TV and Video Now On-Demand
Every third viewing hour now spent watching on-demand TV and video according to the Ericsson ConsumerLab TV & Media Report. The report also reveals a 71 percent increase in watching video on smartphones since 2012, with nearly two thirds of teenagers’ total TV and video viewing time spent on a mobile device and that almost one in 10 watch YouTube for more than three hours per day. 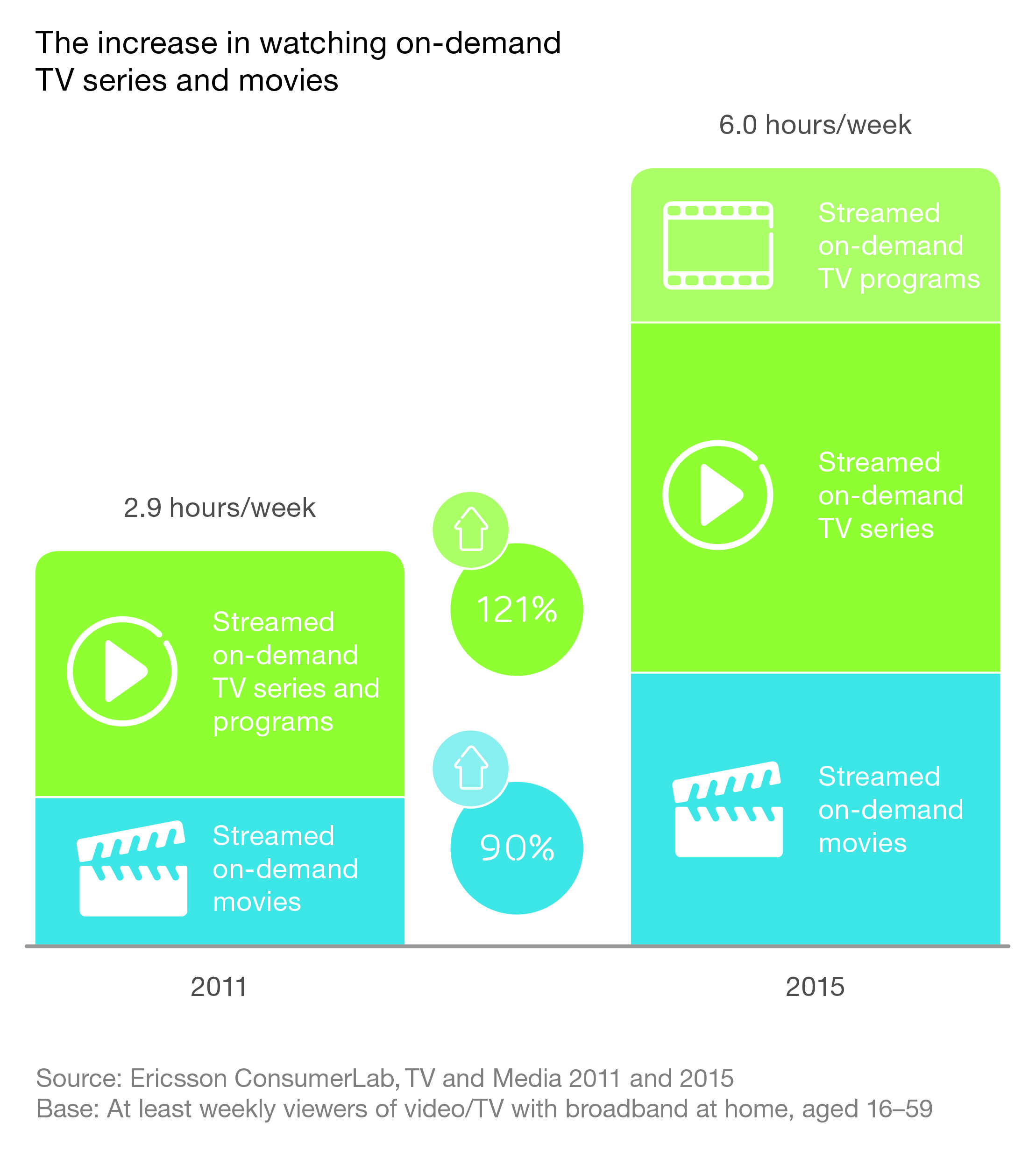 Five Media-Enabled Devices Per Home by 2019
By 2019, there will be the equivalent of five media-enabled devices per household around the world, according to research from IHS Technology. US homes are predicted to have 10 devices, on average, making it the biggest market. The market will be driven by smartphones, which are predicted to outgrow tablets by a significant margin, and smart TVs.

Cord-Cutting Currently Mainly Just Speculation, Claims Study
Despite widespread industry fears over subscribers cutting the cord, only three per cent of global viewers had actually done so according to research by Rovi. However, the study also found that over half of respondents had given cord cutting either “a lot of” thought or “some” thought.

22 Percent US Cable Homes Have an OTT Service
Around 22 per cent of US cable subscribers also pay for an OTT service, according to a study from Millward Brown Digital. While Netflix is the biggest provider, HBO Now is now recording the fastest growth and Amazon Instant Video is also growing faster than Netflix.

Content More Important Deciding Factor Than Price For Online Video
More than half of viewers are driven by a ‘content-related’ factor when looking for an online video service compared to just 39 percent who said price according to a study by Strategy Analytics and Piksel.

Smart TV No Longer the ‘Go To’ Connected Device
The smart TV is no longer the ‘go to’ connected media device for consumers, who are turning to multiple devices due to costs, ease of use, UI and navigation, compatibility with other ecosystems and the apps/services/features available according to a study from Strategy Analytics.

Falling Number of US Homes Pay-TV Subs
Around 83 per cent of all US households subscribe to some form of pay-TV service. This number is down from 87 percent in 2010, according to research from Leichtman Research Group (LRG).

Envivio Narrows Losses
Envivio has announced financial results for the quarter ended July 31st 2015 and claim to have made progress towards profitability. The company has also been acquired by Ericsson for $125m.

Ooyala Claims 25 Percent Higher Video Ad Revenue Through SSP
Ooyala is claiming eCPM uplift of over 25 percent across a set of more than 40 plus broadcasters and publishers across Europe using it’s Ooyala Pulse SSP.

Teads Claims Programmatic Growth
Teads claims revenue from its private exchange offering and open exchange has grown by 300 percent year-on-year based on the January to August time period.

This Week on VAN:
There is Huge Potential for Programmatic Video in the APAC Region, read more on VAN